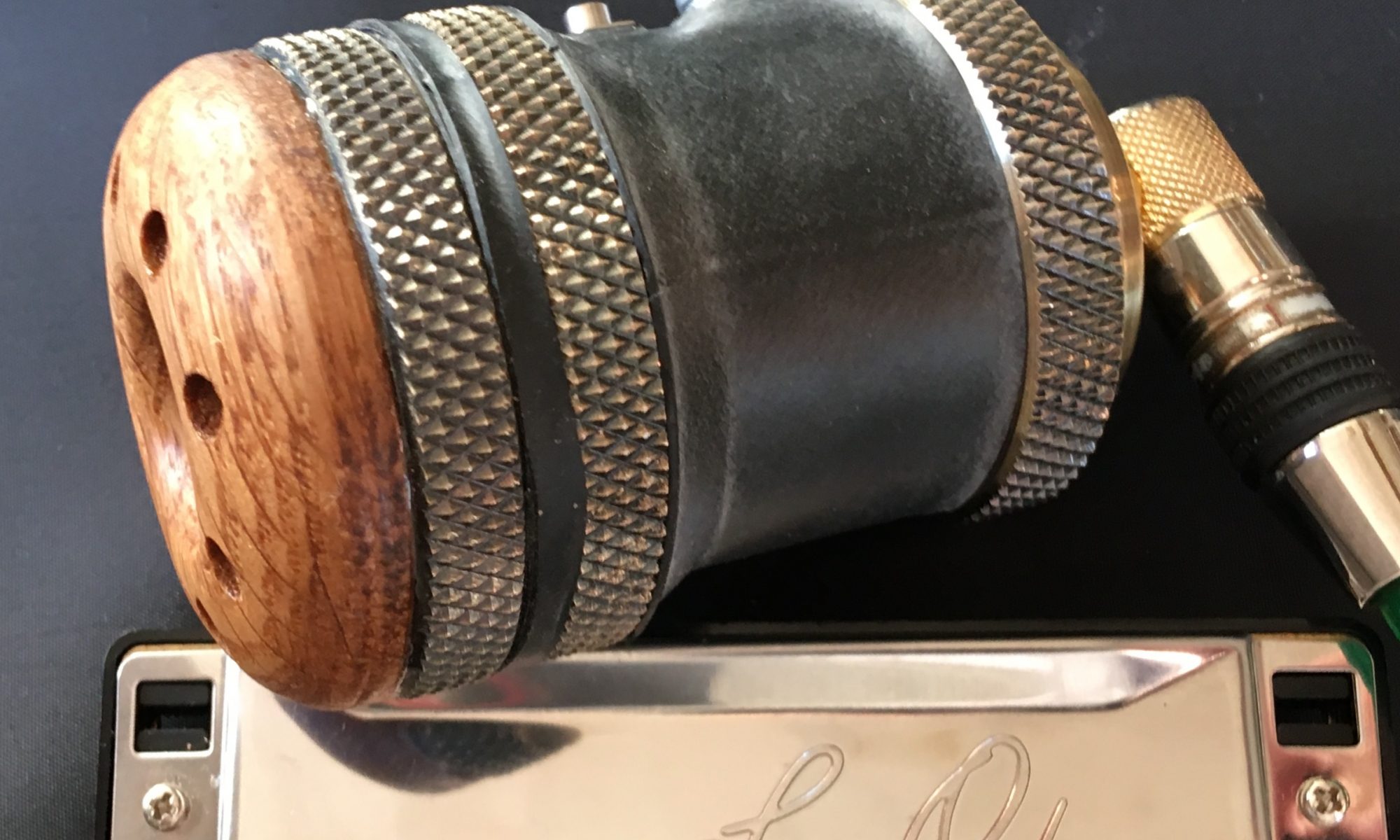 The Silver Bullet Dynamic | Special II – Dirty 50KΩ/Clean 4KΩ switchable (with volume control) is a light weight, high performance mic that offer the ultimate in flexibility for amplified harmonica with two separate and contrasting dynamic elements within one mic.

Even if you play mainly dirty blues or rock (for example) being able to clean up the sound at a touch of a button is very appealing and provides you with an arsenal of sound potential and scope for a new range of amplified harmonica sound. The tone from both elements are warm, responds to cupping and pressure changes and the high-Z element breaks up nicely to produce some great dirty and fat blues sound. Both elements are rich with full harmonic content and great bass.

Artisan quality and custom-built this mic is definitely a keeper! – when you hold the mic it feels small, solid, industrial and rugged. The bullet mic is neatly finished with a leather wrap and lovely dark hardwood fascia. The mic’ is exceptionally light in your hand and is easy to hold with a harmonica while performing so you don’t get hand cramp after a long practice or performance. Weighing about 20% of the weight of a Green Bullet you wont notice you are holding it!

The Silverfish switchable mics are probably the only harmonica mic available that offers the choice of two separate dynamic elements within the same microphone allowing relatively seamless change between powerful dirty Lo-Fi or clean sound performance.

Here is some terrific feed-back from players who use Silver Bullet Switchable Microphone as part of their amplified rig:

Richmond Chadwick, USA
“Hi Rick
Brother, I thought the last one [Silver Bullet Mic) was the best thing ever…. and you improved it. Blown away Rick, blown away. Thanks, Rich”

Trevor Llesley, Hampshire, UK
“Hi Rick, received my mic. It’s bloody gorgeous to say the least. Just had a blast on it, flicked the switch [from clean to dirty] and wow, different gear. Love it. I hope you sell many because they sound great and look fab. Cheers Rick”

Jonathan Lee-Stokes, Lincolnshire, United Kingdom
“Hi Rick , had the mic a good few days now and I’m very happy with the sounds available and the build is great and very different from conventional mics which I really like. Thanks again for the extras, all the best and a happy new year.
All the best Jon Boy“

Mick O’Neill, Kent, United Kingdom
“Rick. Had a bit of a jam, through my old fender tube amp no compression or reverb settings on this amp still sounded gritty and dirty just how I like my blues breaks, picks up all stages of bends well, very pleased with this mic.
Mick”.

Holger Hagen, Germany
“Hello Rick, I must admit, I am not the harmonica Player in our duo. He is 76 years old, who never learned to speak English and he hates to buy something on the Internet But anyway, I want to tell you about the shine in his eyes (and in mine as well) hearing the full sound of the dirty version of the mic. And when he has to do some background vocals, he easily switches to “clean“.
That is good enough for that and keeps him mobile with his wireless system. Last but not least, he is really pleased with the smooth feeling in his hands. He likes the design, the size (in his small hands) and the leather wrapping. So we are looking forward to our next gig on 6. December. Kind regards Holger Hagen”

Clive Ellul, Barcelona, Spain
“Rick, played my first gig this weekend and as you say, it´s lovely piece of gear. Bit bigger than what I thought but even with my small hands it doesn’t get uncomfortable as it is light and grips well.

I´m using it through a VOX AC4TV which I was intending to mod, changing capacitors and valves, but now I don’t think I will bother, because with this mic I get the crunch that I like and feedback doesn’t seem to be an issue. Via a cheap Chinese spring reverb pedal, the tone is great. Clean has also a great tone. Sometimes it´s worth paying a bit more. Great mic very happy and please keep me posted on the new gear you bring out. Cheers, Clive”

Joseph Markey, NY, United States (US)
Rick, I received the mic and really like it. It is very light and easy to hold. I’ve been playing it directly into an 8 watt Z amp (tube with 15 inch speaker). The sound is great. The difference between the high and low impedance is really cool and very noticeable….

I played the new mic at a three hour jam session in NYC Saturday night and received a compliment on the sound quality from one of the guitarists. This guy builds amps so has an appreciation for sound and electronics. You’ve got a great product!
Thank you! Joe

Keld Marple, Frederiksberg, Denmark
“Hi Rick
Just wanted to let you know that after having owned and played the silverfish microphone for some time now, and I am very pleased with it. I have used it through my PA and a little Pignose and recently through a Dynacord JAZZ and it always sound as great as I hoped. So I am very pleased with the purchase.”